The Origin and Current State of Active Learning 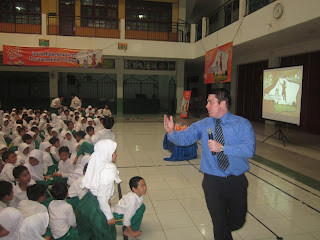 Hi Guys,
Today I decided to write up a little about Active Learning. My great claim here is that 'Active Learning' is probably the most overused and misused phrase amongst teachers here in Indonesia. It sounds shocking I know, which is my intention. Now that I've got your attention let's look a little further into this 'modern' concept of 'Active Learning', or is it?

Active Learning is often explained to parents here wanting to put their children into 'elite' schools as 'learning by doing' (unfortunately many teachers with degrees in a Subject rather than Education know AL only as that) this is fantastic, to 'learn by doing' instead of just being a passive recipient to information; but it is only a scrape off the surface of the Active Learning concept, a concept which I hope we can explore in a little more detail in this article.

Last century and especially in the last 25 years (thanks to modern scanning technology) we have learned a great deal about how the brain works. Around the middle of last century notions that learning was an active process where the learner had to be involved to succeed started flourishing in the west. These studies were not to be acted on at large until a few decades later,( now the norm in the USA, UK, Australia, Canada, New Zealand and Europe). Many developing countries are only starting to catch on to these movements now.

Where and when did it begin in the West exactly? Well, after the work of Jean Piaget who in 1936 explained 'how a child's thinking develops and matures in stages, as a result of natural curiosity to explore the environment.' in his book 'Origins of Intelligence in the Child' and the 1920s work of Lev Vygotsky was translated into English where he presented his theory that a child learns through experience. Nothing much happened in the classroom. This is of course with the exception of Dr. Maria Montessori who in 1906 had already begun to apply the 'learning by doing' aspect Active Learning without the need for intensive studies or theories on the matter because she knew it worked.

Why and how did she know it worked? Because she noticed that by giving disabled children more autonomy in how they learned they succeeded beyond expectations. She thought it only logical after studying Philosophy (much of which was what we call Psychology today) that the same should work for regular children. Maybe through her studies she got a taste of the knowledge of our forefathers and their 'learning by doing'. Yes! Our forefathers already knew about this, they just didn't formalize this knowledge as it was probably considered common sense.

Most of our forefathers lived in small village communities. Much of their life consisted not of theoretical activities but of practical applications. Thus the best way to learn how to milk a cow was to watch it get done, do it under supervision, then do it by themselves. This brings us to the next parts of active learning. Stepping away from 'Learning by Doing' there are three other aspects to Active Learning:

1. The Mind as a Processor


Let's have a look at these three aspects in the context of our forefathers activities in their small communities and also my own learning experience in school.

The Mind as a Processor:

learning can be rephrased as the processing information because essentially to learn something and to commit it to long-term memory the information must go through a lengthy process in our brains it looks a little like this:

1. Information gets presented ---> 2. We choose to focus on it or not ----> 3. if we choose to focus on it our brains will then choose to store it as something real or forget it as something of no use ------>4. the information will then be criticized by our sub-conscious and our perception of the world around us-------> 5. The meaningfulness of the experience will determine whether it is to be remembered in long term or short term memory-----> 6. Long term memory puts information into groups and builds connections, the stronger the connection the stronger the memory.

I'm probably off by a couple of points but so far the research that I've seen shows a similar if not more complex process.

By understanding this process we can then realise not only that we should involve our students in the information delivery through experience (learning by doing) but we should also make sure it's meaningful, something which has been a little forgotten as teachers try to make all information meaningful, where clearly all information is not meaningful to everybody. An example of this is mathematics, I found out after year 7 or 8 that the maths I was being taught was not of any real use to me and my dreams and goals in life. No matter how much work the teacher put into making the subject fun and trying to link it with real life activities (trying to attach meaningfulness) my brain knew through my subconscious that it was all a waste of time. The mathematics I learned after year 7 and 8 was all forgotten as a consequence. Which is not a bad thing, it's just a proof that our brain is built to learn, and unless teachers (and more importantly education departments and schools) understand about that build they will continue to try and make things meaningful for everybody. Thus setting themselves and their students up for failure, wasted time and perhaps a loss for the natural love of learning and inquiry, inbuilt in every child.

Ahh I made a promise that I would use the example of our forefathers in their small communities, didn't I? Well in their small communities there was huge importance (thus meaning) to them in all the practical information they were learning. This is because it was all connected in relation to their lives and the lives of their family, friends and neighbors in there community. If the cow was milked they all had milk to enjoy, if they had milk to enjoy they could be strong to plow the fields well, then they had bread, bread gave them the power to build structures and fix roads, this made their life better. They saw the result of their labours in front of them and how everything was connected. This didn't need to be written about of theorised about as it simply was the way of life that they had been dealt by God.

The Spiral Curriculum developed by Jerome Bruner (one of the fathers of Active Learning) and published in 1960 in his book 'The Process of Education' consisted of three stages going outwards in a spike spiral:

Stage one: Ideas are presented in a simple and intuitive way (we could do this through learning by doing experiences)

Stage two: They are continuously revisited and reconstructed in and increasingly formal way.

Stage three: They are finally connected to other knowledge for comprehensive mastery of the subject.

It is the room for improvement now that I'd like us to question ourselves about. Despite the knowledge and education of Active Learning in it's completeness across the globe it has still failed to actualize in it's complete form in millions of schools (despite it being on the tongues of teachers in those very schools). I think that may be because there are many other aspects and concepts that are now available to us that can inject meaningfulness into the process. Many of which have not been taught to teachers and by 'not been taught' I mean teachers have not been actively involved in the process of learning about them and if they have been then there often hasn't been enough follow up and then connections to other areas of knowledge to make Master Teachers.

This article cannot possibly achieve any of that but what I hope it does do is excite a desire to expand your quest for better ways to teach. Expand it outside the realm of Ambil Tiru Modifikasi (modeling, copying and modifying) with the teaching habits of Western schools. As we can see clearly above that in the West the knowledge of better ways to teach and it's widespread application in schools is often decades apart. If we are to be decades apart from the widespread application in the West, that puts us at close to half a century behind what we could be (theoretically speaking).

Jump then my friends on the Revolutionary Education bandwagon and try to apply things for your self in your classroom with your fellow teachers and push the envelope with new ideas in your school. Don't wait for it to be ordained by the Education Department or by the School's Management because they aren't on the ground, and until you see the need for change, they won't.

Don't let your students be 'half a century behind' in the way they learn. The internet is at your disposal and there are plenty of schools and teachers already taking the revolutionary path that you can take examples from.

I hope this article can promote some discussion and although I haven't got many followers and haven't promoted this site yet please don't hesitate to spread it around if you like what's being talked about here.

Until next time guys, keep thinking outside the box and let's change some lives!

P.S. Sorry i haven't included any pics today, I will try and update this article with some pics later.
at 10:09 PM