How to build a Language Switch in Students 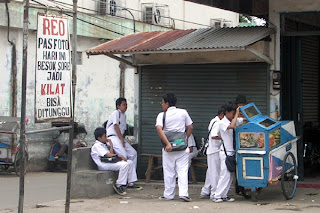 It's been a while since my last post but I'm glad to see that my page views are steadily going up. It means that the effort I put into my blog isn't wasted. So please if you like the blog, recomend it on google or facebook, thanks.

Today I want to write about building a 'language switch' in student's. What is a language switch you may ask? Well for those who don't know yet, a language switch refers to the ability to be able to think in the target language. The benefits of being able to think in the target language are very obvious but I feel it's still important for us to remind ourselves of them before we go on. The first and foremost benefit though is of course the 'snowball effect' which I will talk about later and the next is 'smoothness in speech and comprehension'.

Smoothness in speech and comprehension (AKA Proficiency):

Have you ever heard somebody talk half in their mother tongue and the target language at the same time? That is called inter-language. Another phenomenon is people replacing thoughts with 'ah eh errr' which is a normal habit (authough a bad one) for native speakers but for an L2 speaker it can be disastrous. As by the time they find the words they are looking for, the moment is lost. The reason for those 'ahs ehs and errs' is usually because the L2 speaker is going through their own language first and then structuring the L2 which creates many problems.

To quote one L2 learner from Argentina studying in America he said "...at first I tried to find similarities in the grammar of my own language and English, but then I realized that it wasn't working. For me to speak English well I had to learn English directly, not through my mother tongue...".

Some things that show a language switch is in effect are:


The 'Snowball Effect':
The snowball effect as its name suggests is where the student's L2 ability and scope gets better only through the momentum of the amount of L2 already acquired.
The best example of the snowball effect can be seen in a Total Immersion School. A Total Immersion School is a school where all subjects are taught in the target language and the target language is the language used on campus. If you are interested in finding out more about Total immersion Schools you can google 'The French Immersion Program in Canada' Immersion Schools have been running in Canada since the 1950s.
In an immersion school students see an immediate need to use the language and use the L2 they already know to navigate in their surroundings. This is by far the most natural and best way to learn a language as they are living and breathing it on a daily basis and have no way around it. Even doing a simple activity in class like building a cardboard castle or exploring a new concept in science can be a language acquisition experience.
The second example of the Snowball Effect is of students who once they have a language switch in place, explore English by themselves in their free time. This is done through, books, comics, TV programs, Movies, Songs, Twitter, Facebook, Online Games, Offline games (in English) etc. and most of the time the students aren't doing these activities because they are interested in learning, but because they are interested in the medium and activity.
So if we aren't teaching at a Total Immersion School how can we Build the Student's Language Switch?
The easiest way I've found to develop a language switch and meet our claim of 100% success is to use the Total Physical Response approach (TPR). First developed by Dr. Prof. James Asher it is by far the most effective method I've found for students of all learning abilities.
Many teachers have turned their noses up at TPR because they feel it teaches a limited scope of the language, which is true. Then again though, to develop a language switch, love for the language, confidence in learning and an impressive amount of vocabulary, we don't need a broad scope. We need a scope that is practical, real and can be used/understood right away by the students.
Here is a demonstration video of the first lesson in a TPR course, where the instructor is teaching Indonesian:

As we can see from the video the students are having fun, aren't stressed at all, immediately begin to comprehend and store the language and aren't pushed to speak at all. There is no failure and immense success shown in this lesson.
Dr. James Asher described the factors for language acquisition (which he modeled of how a child acquires their first language):
1. A Stress-Free Environment (in alignment with Krashen's 'Affective Filter Theory')
2. Comprehensible Input
3. The Right to Remain Silent
When the students are ready they will speak up by themselves, and they will even be raring for the challenge when the time comes. That time however is different for different students, forcing them to come out of their shell too soon can sometimes set them up for failure and leads to them shutting themselves off.
That's all I have time for today, I hope to continue this article another time where I will give information about the 'steps of TPR' (of in full are not well known) and perhaps some more tactics for developing a language switch in students.
Thanks for reading guys and don't forget if you have any questions you can comment here or post them up on our facebook group page.
Until next time, peace out and let's change some lives!
-Hugh
at 9:00 PM