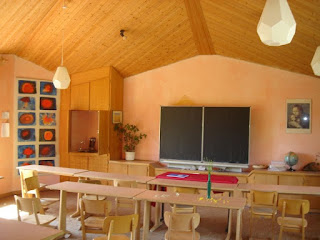 Recently the education board in Indonesia has been seriously talking about some mammoth changes for the 2013-2014 curriculum.

The changes are said to include removing English from the primary school curriculum. They say this is because they will replace it with a subject to improve attitude.

Now although I do not really know too much about the changes yet to comment on them here, the whole issue did get me thinking about a speech I heard from Sir Ken Robinson about Changing Education Paradigms. I feel the point of his speech can be summed up in a few words - we need to seriously question what we know about education itself, rather than making small changes to curriculum, standards and management we should be making big changes to our perceptions and pushing to make education what it truly should be. Those are my words, not his but a summary none the less.

So what should education be? I don't think we can fully answer that question before we take our first steps on our new journey, and to make a new journey in a better and more effective direction we need to first remove ourselves from our current path. But hasn't the path been working fine up until  now? I think we can all agree on the answer to that. This conversation about reforming education will never stop untill we first reform and refine our thinking on the matter.

Below is a RSAnimate video of the talk he gave in 2003 on Changing Education Paradigms. It is very easy to follow thanks to the illustrations even for a non-native English speaker.

It is well worth a watch! I've transcribed my notes below the video for those who prefer to read and for those who want to see my feelings on each issue. Enjoy! ^_^

Any of my own feelings or opinions will be written in italic like this. The summary of the speech below is not quoted word by word but rephrased/written for easy reading.

Around the world today there is a lot of talk about reforming education. According to Sir Robinson there are 2 reasons for this.
1. Economic: How do we educate our children to take part in the economies of the 21st century? Given that we can't anticipate what the economy will look like next week? As demonstrated by the recent economic turmoil.

2. Cultural: How do we give our children a sense of cultural identity while still teaching them how to thrive in the global village?

The problem is, schools and school boards are trying to meet the future by doing what they have done in the past and in the process they alienate millions of students.

In the past we were sold the notion that if we studied hard, did well and went to college we would get a good job. Our children don't believe that anymore and they are right not to. A college degree is good, but not a guarantee on a job anymore, especially if the route to it marginalizes most of the things you think are important.

Our education system now is still based on an enlightenment view on education and caters to the needs of the industrialization era.  This creates a certain perspective of education that although very useful in the past and a great step forward then, our perspectives need to be seriously revamped to keep up with the current era.

The prophet Muhammad SAW was said to of said "Teach people according to their era!"

There is an increase in Attention Deficit Problems with teens, mainly because of a lack of adaptability in the way we educate.

What we are prescribing for our children is an anesthetic experience. To hold their attention we are asking them to shut their senses off. What we should be doing is waking them up to what they have inside themselves.

We have a model of education based on the interests of industrialization and in the image of it (like a factory). Think about it!

There are many different children of the same age that learn in different ways. Some learn better in groups, some on their own, some in the morning, some in the afternoon.

It's all about 'conformity' and you can see this in the constant increase in standardized testing.

The above line is especially relevant in Indonesia!

Sir Ken Robinson suggests that we should go in the exact opposite direction. That's what he's talking about when he says ' a change in paradigms'.

This may be because amongst other things in school we are taught:

We have to think differently about human capacity. See that many of the concepts we have of education are myths (like the separation of academic and non-academic individuals). Realise that great learning happens in groups, collaboration is the stuff of growth.

If we atomize students and judge them separately we form a disjunction between them and their natural learning environment.

To discuss this article and Sir Ken Robinson's ideas together please visit the CLT Facebook Page or leave a comment bellow!

Until next time, keep shining sharing and succeeding!