How to become a Suggestopedic Teacher: 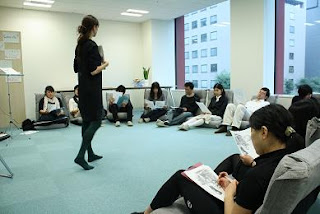 Today I want to talk about a fairly famous method of learning a language but one that is frequently misunderstood or deemed to complicated or outdated to be practical in today's classrooms.

I want to try and dispel that notion for those who have heard of Suggestopedia and introduce it to those of you who haven't.

Unfortunately in most teacher training around Indonesia not much energy is put into studying and appreciating the different methods that have been used over the years to teach language. A lot of the time courses go into the theory of the different methods but often with a critical eye and by critical I mean 'criticizing' not 'important' which I think is an important differentiation

Suggestopedia rocked the industry when it was first released by it's creator and developer Georgi Lozanov. Unfortunately a mysterious and suspenseful curtain (an iron curtain to be precise) was drawn over the method before Dr. Lozanov could teach any practical application of the method. This curtain was only lifted momentarily when Dr. Lozanov was allowed by the Bulgarian government to go to the USA to share his method with Bobbi DePorter. He would not get many other chances to sit down in peace and share his method until the Berlin wall fell (signaling an end to the USSR) and he and his family were able to settle in Austria after hopscotching their way across Europe.

By that time though, the method had lost momentum amongst the Language Acquisition community and was perhaps considered old news. The uniqueness of the Suggestopedia method was perhaps also a great contribute to it's fall from popularity. Like TPR Suggestopedia did not rely on textbooks to work and thus probably wasn't accepted that widely in the formal education community.

This has been a reoccurring plague of thinking that has killed or hindered many good methods for language acquisition and even our basic concept of 'how we acquire languages' has fallen flat on it's face many times because Textbooks and most Summative Tests of 'knowledge' force teachers into a box (but we will discuss that more another day).

For now let's go over the basics of Suggestopedia. Firstly Suggestopedia is based on the concept of suggestion, some people may know it as hypnosis or NLP (Nuero Linguistic Programing). Basically Dr. Lozanov knew about how negative suggestion can seriously affect the brains ability to absorb language and information. An unideal state of mind such as being in a state of worry, stress or discomfort can also have a negative affect. After Dr. Lozanov, Prof. Dr. James Asher and then Prof. Steven Krashen also came to the same conclusions that the brains Affective Filter can hinder the ability for us to absorb a target language. I have discussed this before in my article 'Break Down the Barriers to Learning a New Language'.

What Suggestopedia does is give us a routine, environment and attitude as teachers to lower the Affective Filter and optimize our students state of mind for maximal learning ability. Sounds pretty good? Well we can perhaps discuss the theory of it some other time or in person if your really interested but I'm probably right when I assume it will probably bore you and you want to see practical examples and ways to apply it in your classroom right now. Okay so here we go!

Step one: New Identities (this is done at the beginning of a new course. Step Two-Six will be repeated several times in a course, Step One is only done once)

To improve students motivation and to help them get 'in the zone' they accept new identities which they will use for the duration of the course. This also assists in the students understanding the culture of the language as these new identities represent individuals who are native speakers of the target language.

I have seen this done in two ways. the first using a dramatic scene where the teacher will act out the text. The second where the teacher hands out a the text, translated but with the translation in the left column and the target language in the right (according to Lonny Goldman this is because the brain has a natural urge to look to the right of the text as we do in reading) and then reads it in a dramatized voice. In both cases the students should be completely relaxed, without pressure to memorize anything and with classical baroque music playing in the background.

The Activation Phase will be the next lesson after the Presentation of Text Phase. Students are required to of taken the text home to read before bed and first thing after getting up in the morning. They are now ready for the Activation Phase. In the activation phase, up to 12 activities playing around with the language can be done in a hour. These activities are not always completed but sometimes finished half-way through (we can see reasons for this through psychological studies that show that people remember tasks more when they haven't been completed). These activities are also all masked as fun games or tasks that have no relation to to Language Learning or Acquisition at all (this is to keep the brain relaxed and 'in the zone').

The Passive Concert takes place at the end of a Activation Phase lesson. Here the students relax completely while they listen to the text being read in a soothing and calm way. It is preferable that they are in a reclining position and listening the baroque or 'Alpha State' sounds. For those of you who are unfamiliar with the 'Alpha State' it is a state where the brains activity is at an optimum activity for absorbing knowledge, you can read more about it here: 'Alpha Waves'.

The Adaption Phase is where the students now play around with the text they have been hearing. Here are some examples of Adamption Phase activities from Lonny Goldman's Website:

'a. Oral Comprehension.  The whole class listens to a tape, and then breaks up into groups of three or four students per group. Each group receives a bundle of cut-up paragraphs, all of which, together, constitute the entire text just heard. The different groups can put the paragraphs into the right order first. When a group thinks it has won, the teacher replays the tape to check whether the order is right (more hidden oral practice!).
b. Written Comprehension.  Each student receives a different newspaper clipping and quickly reads it. Then, in pairs, the students tell their partners about their particular article. The teacher now collects all the articles and puts them down on the ground (or pins them up on a wall). The students then mill about, looking at all the articles to identify which one their partner had.
c. Written Expression.  Students must create something in writing based on a situation in the text. This might be an advertisement for a nice restaurant, an exotic tour proposed by a travel agency, a funny newscast, etc.'
-Lonny Goldman

This is the only time in the course where grammar is consciously examined. That being so, it's only grammar they they already subconsciously have an understanding of through the text. This phase is usually done in a similar fashion to the Activation Phase in that students play games with the grammar structures in a fun and stress free environment.

Okay Guys! Well I hope you enjoyed reading about Suggestopedia. As you can see it's actually very in line with what we have learnt about how the brain works in the last 25 years. It is also in line with Steven Krashen's 5 hypotheses of Language Acquisition. So why don't you give it a try some time?

Even if you can't follow the above steps that's know problem because being a suggestopedic teacher doesn't mean you follow a formula, it just means you understand the power of suggestion or 'desuggestion' (desuggesting negative feelings and filters)  and you make sure your lessons all harness it's power.

If you'd like to see some suggetopedic lessons in action you can watch this movie series from Lonny Goldman (a practitioner of Suggestopedia from the USA):


Until next time, keep improving your lessons and striving for that 100% success rate!