Lessons learned from sitting in traffic 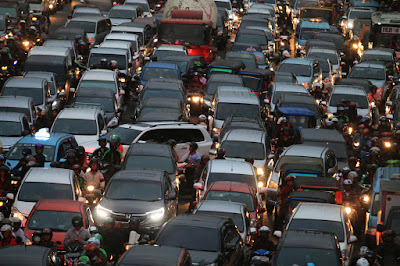 "How did I get myself into this situation yet again" I thought to myself as my car inched its way through traffic. I called my wife "I think I'll be home around 11... I know... I left two hours ago, the traffic is insane... yes I know Friday evenings are like this... okay just go to bed, I'll try not to wake you".

For me that was the occasional Friday evening, I used to go to a public speaking club in the city. The club was great and I enjoyed being a member, however whenever I had to go home I felt like I'd rather check into a hotel than face the traffic home.

Jakarta is like many other megalopolises today. I have always worked in satellite cities surrounding the Big Durian so I never had to experience the full brunt of Jakarta traffic everyday. Even so, the traffic on the outskirts of the city, on the many ring and sub-ring roads, was enough for me to question the sanity of it all.

How can people working in the city put up with it. To reach the office at 9am they have to leave around at least 7am, then they will face two hours in traffic. If they leave before 6am, they may get to their office in under an hour, but then they are two hours early. Some offices have combated this problem by allowing an "early clock in" program, where if you clock into work two hours early, you are also allowed to leave two hours early. Unfortunately though they are in the minority. Additionally those "early clock in" programs are often thwarted by workload and meetings.

So what is the solution? Some have mentioned that offices could make a "work from home" arrangement a few days a week. Essentially this makes sense as those 4-5 hours a day some workers are spending on the road are not productive hours. Or as the state of Utah did with government workers in June 2008 the working week could be changed to four 10 hours days instead of five 8 hour days. It was stated that the Working4Utah program resulted in "reductions in absenteeism and overtime [which] saved the state £4.1 million dollars". This shows that rethinking the way we work not only makes for happier workers and less traffic but also reductions in business operating expenses.

Another solution is that from an individual level. A typical white collar salary in Jakarta today is approximately $280 USD per month (Feb 2018). When the monetary financial crisis hit Jakarta in 1997 my barber lost his office job in the city. He knew that looking for a "job" at that time would be pretty hopeless so he started to self-teach himself how to cut hair. Now he charges a very reasonable fee of S1 USD for a haircut and a shoulder and head massage. This is an affordable price for everybody that lives in his neighborhood. He walks to work and serves an average of 20-30 customers a day. 20 USD times by 20 days a week means he is grossing more than 400 USD per month (as small businesses like his don't have to pay tax in Indonesia). He has to pay around $70 USD a month for rent and perhaps another $10 USD for electricity. So let's put his running costs at $90 USD a month. You can see now why it wouldn't make sense for him to apply for jobs in the city, bear the commute and travel expenses, only to earn less. Additionally, he is his own boss, there is nobody telling him how to serve his customers.

I have been told that in China today more and more young Chinese find it hard to accept work over starting their own businesses. The average salary for white collar workers in China has now overtaken Indonesia and even the Philippines, yet companies still find it hard to recruit dynamic young people. This is because the cost of getting started in business is becoming less and less everyday and the lure of future success has become too tempting to ignore.

One of my favourite quotes is: "When nothing is for certain, anything can happen." Indeed when hours of sitting in traffic everyday become a certainty, perhaps anything else is better.

What's your take? How is it in your country? Are people turning to business, freelancing and the gig economy instead of traditional jobs? How bad is the commute to your CBD? I look forward to the discussion!