China the land of Silk, Tea and English Centres

I greatly admire the Chinese resolve.

Not only in work, migration, friendship, family and business but also in studying. They are (in general) extremely diligent students. I've taught Chinese Indonesians before, was schooled alongside Chinese natives in Australia and have many Chinese friends. More recently too I've started to see the mammoth rise in demand for English in China just continue growing.

English centers are sprouting up all across the country, children start studying English many times at the age of 4. The US licensed institute Disney English now has hundreds of centres in China and they aren't even the biggest. The New Oriental English course is said to have 324 learning centres and schools in China. The entire English tuition industry is said to be worth over USD 3.1 Billion.

Every year more than 10 Million students take the Gau Kau College entrance exam. The exam lasts 3 days itself but many students spend 3 years with 12 hours a day preparing for it. In this mighty exam where literally the future of millions of young Chinese rests 25% of the score is based on English competency. Meaning if you cant speak English you will equivalently fail in the eyes of the top universities.

Fail to get into a local university? International Universities have even more stringent English exams for entrance, unless you are prepared to put in a year or two of expensive pre-university English study in the host country, which is what many overseas students do every year.

So English is really a game changer for Chinese students. That doesn't mean it isn't for the rest of students studying English as a foreign language but it does mean the Chinese are stepping up their game and realise the importance of this global language in such a dynamic international economy.

Unfortunately English is not cheap. EF (Education First) estimated in 2010 that there were just 5,000 Native English Speaking  Teachers (NEST) with valid work visas at that time in China, with an estimated 300 Million students looking to learn English. That means 60,000 students for every NEST. Of course not all those students study with a Native but most Chinese students and parents still believe a NEST is better and would opt for one if they had the choice, access and means.

The above means that local English teachers (nNESTs) have to bear the responsibility of preparing those 300 Million students for a promising future. Teachers like Li Yang the founder of Crazy English who is perhaps the most financially successful English teacher in the world. He sometimes teaches stadiums full of students in intensive camps and courses that last weeks with full days of study.

Why do you ask is English such a big deal in China? Isn't Mandarin supposed to be the next 'International Language'?

This means that even if the apparent economical and military superiority of the USA subsides English will still be here to stay, simply because it's already there.

So the Chinese are on the ball. They know what needs to be done to succeed and they are going about doing it, whether it takes 12,14 or even 16 hours of study a day they will succeed at any cost.

What does this mean for the rest of Asia and the rest of the world of ESLers (People learning English as a second/foreign language)?

It means that we better pick up our game if we are going to succeed. A global economy means a competitive economy. The students in Indonesia, Malaysia and Thailand will not only be competing against the school next door for jobs and business but they will also be competing with people from all over the world. Now with the upcoming New ASEAN work and trade agreement English has become more essential than ever. Unfortunately our schools, education departments and even parents are late to catch onto the changing climate.

Before English was a plus, now it's a must!

Even in countries like India where the education system was largely modeled off the British and English is felt to be a familiar language, employees who speak good English will earn an average of 30% more than their equally skilled counterparts. In Indonesia I have no idea of the exact figures but from what I can see from my friends and coworkers it is probably the same or greater.

Also more often now, a lack of English skills is becoming a barrier to securing decent employment. With an increase in qualified individuals due to the rising amount of University enrollments employers can be more picky when selecting candidates, English is now often a basic criteria to filter applicants. Which means in the future you may not even be able to get an interview without good English skills.

I write this article as a reminder to this pressing challenge we all have before us. As teachers, parents and students. A better English education for all means a fairer playing field. Lets promote the better study of English and help the current and next generation succeed in this challenging market with so many dedicated and diligent competitors.

...try and change some lives! 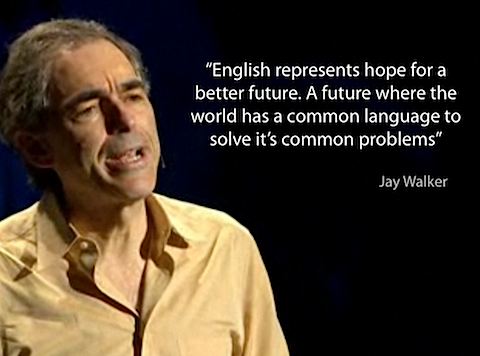